7 Benefits of a Paperless Office for Advisory Firms

This is a summary of a session called Enterprise Content Management in the Cloud (and Elsewhere) from the Tools and Technology Today (T3) Conference that took place February 11-13, 2013 in Miami, FL.

The presenter was Ken Severud, Senior Vice President and Chief Operating Officer of Wealth Enhancement Group, a Minneapolis, Minnesota-based financial planning and advisory services firm with $3 billion in AUM and locations throughout the upper Midwest. 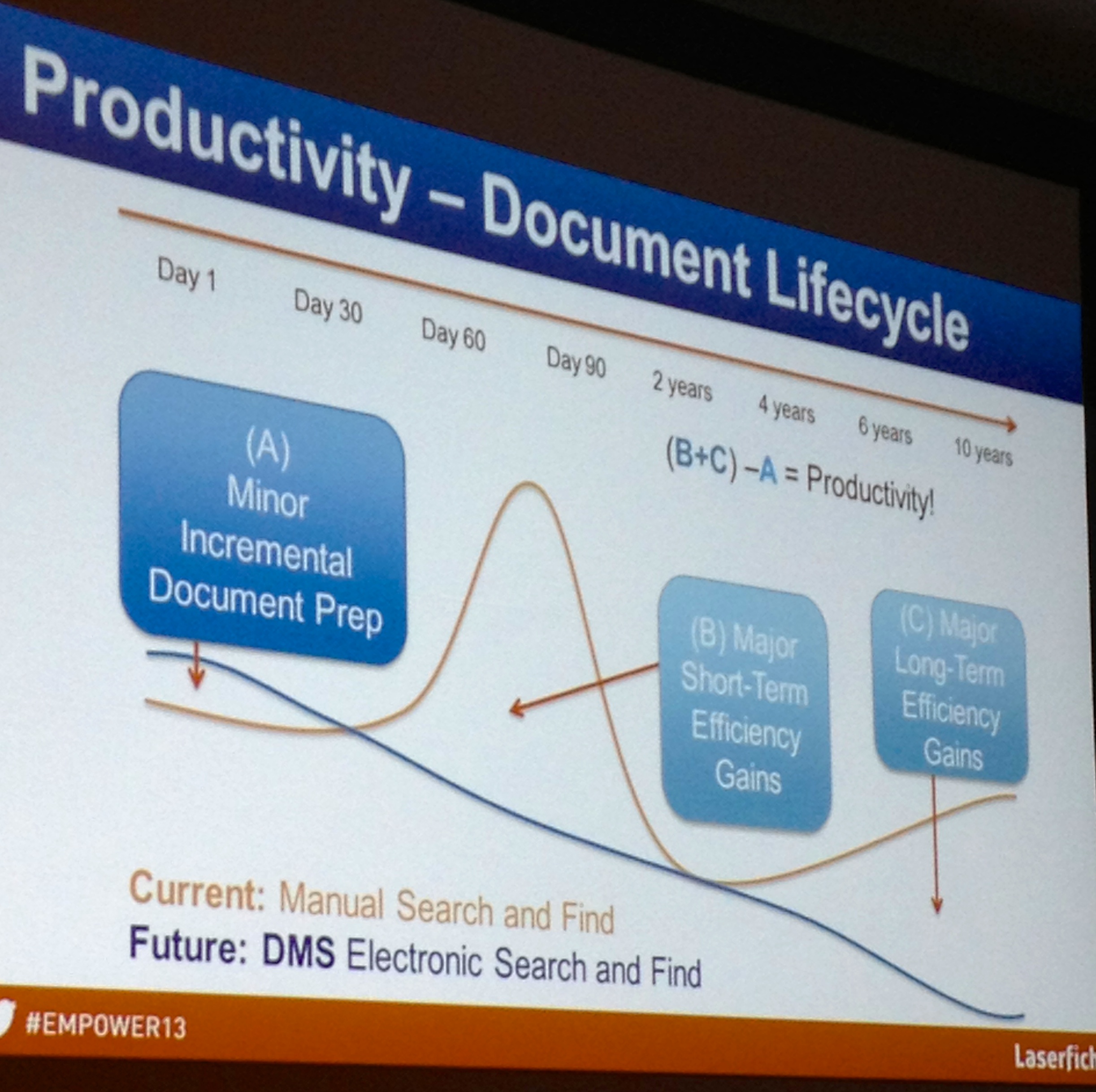 Severud provided a detailed and informative case study on his firm’s deployment of an enterprise content management (ECM) system from Laserfiche.  Wealth Enhancement Group selected Laserfiche for their ECM system deployment because of its ease of use, scalability and robust integration with other third party systems like Junxure.  They previously maintained multiple physical copies of every document and this had slowly degraded the firm’s efficiency over the years and also had become expensive to support.

Severud explained that in the lifecycle of a typical document, the highest percentage probability that it will needed is within the first 30-90 days after it is stored.  After 90 days, it may be a year or two or longer before the document needs to be referenced again.

These future references are usually due to the eventual visit to the firm by regulators and/or auditors.  Locating the required physical documents is a time-consuming and inefficient process.  The work involved in scanning documents into the ECM system requires only a minor, incremental increase in resources up front for capture, indexing, classification and storage.  However, the long-term benefits are immediate and lasting, he observed.

7 Goals for the Defined Solution 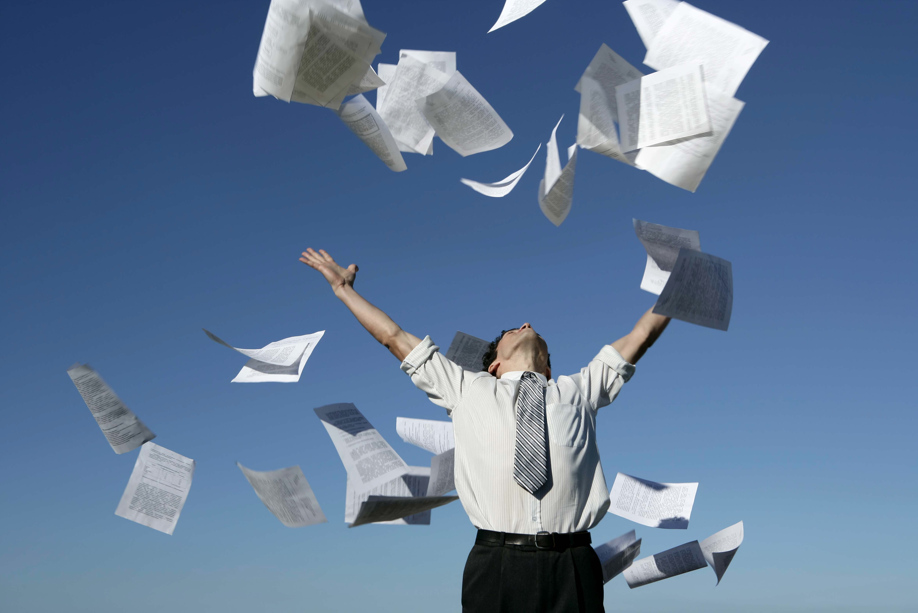 According to Severud, Wealth Enhancement Group defined the following goals for this ECM project:

Since his firm is associated with a broker-dealer, they needed to submit their implementation plan to FINRA in order to receive a “no comment” response before proceeding, Severud said.

The firm two phase approach to the implementation, Severud noted.  The first phase involved building the ECM system and then launching the scanning process approximately a month before connecting it to their other systems such as Junxure CRM.  This would be beneficial for two reasons.  It would enable the back office to monitor and test the system and work out any kinks before going live.  This avoids the problems that some firms run into when they rush new systems into production.  It’s like walking across the bridge while you’re in the middle of building it, Severud declared.

The one month testing period enable the firm to build up a store of documents that would be accessible when the system went live, providing users with relevant documents right when they would be most needed in the document life cycle, he said.

One key part of the project was the selection of a Value Added Reseller (VAR) to assist with the Laserfiche implementation, Severud pointed out.  They chose a firm called Cities Digital, which has their headquarters in Hudson, WI with other offices in Chicago, Los Angeles, Seattle and Austin, TX.

The Laserfiche ECM system is comprised of many different modules that can be purchased separately.  Firms can buy just the document capture module to get started and later add workflow, integration, etc. 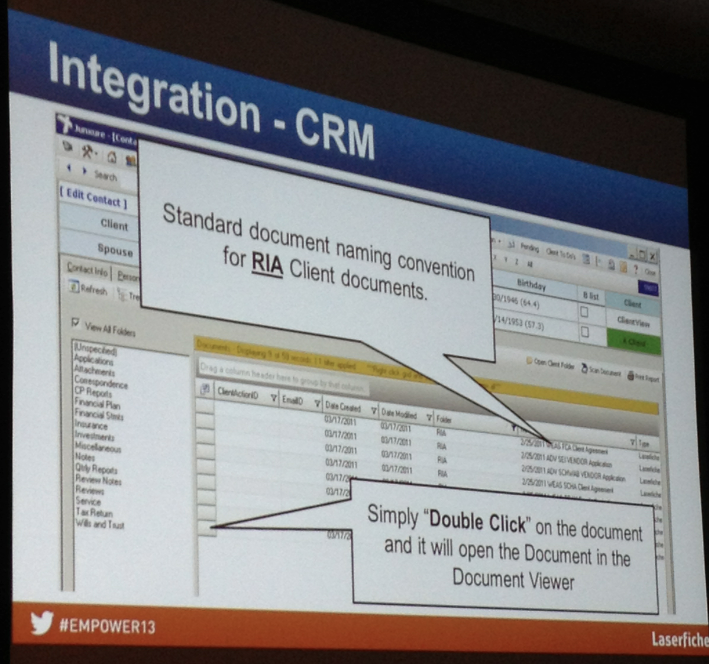 According to Severud, the implementation of a cloud-based, integrated ECM system using Laserfiche delivered the following benefits to Wealth Enhancement Group:

1. Streamlined 35 document management workflows down to only one; this single workflow has two components: a) identify document and storage by client, b) drive daily procedures;

3. Stopped making six copies of every document, by eliminating the need to create safety copies for transfers, new account forms, checks, etc.; they used to have two photocopiers running eight hours a day with 1.5 FTE redeployed from photocopying to value added activities;

4. Reduced postage expense by 50% by switching to double-sided copies;

5. Increased productivity and improved service levels by integrating the ECM into Junxure CRM with a built-in Documents tab that displays Laserfiche directories for direct access to stored documentation;

6. Compliance – Laserfiche provides client-level security, so only employees with the proper access rights in Junxure CRM can open documents, only system admins can delete, modify or change documents; any document that is printed gets a watermark for tracking purposes;  their VAR is a designated third-party (D3P) for SEC compliance and receives copies of documents on Blu-Ray discs;

Wealth Enhancement Group implement a web portal from Junxure called ClientView Live, which permits communication between advisors and clients, Severud reported.  Since the SEC requires this correspondence to be recorded and stored, they setup a workflow that automatically ingests any communication posted on the client portal into their email system. Then the normal correspondence review process takes over, he stated.  For more information on ClientView Live, see 5 Ways Junxure’s Web Portal Can Excite Your Clients.

7. Disaster Recovery – the firm had experienced two instances of flooding in their records room; by moving to the cloud, this is eliminated; Laserfiche provides replication and multi-site access.

Severud shared three of the lessons learned that came out of their implementation experience.  One was to keep your project to a manageable size.  It’s better to start small and expand later rather than taking on too much and struggling, he said.

Another lesson was to create a project communications plan in order to set expectations for everyone in the firm and facilitate user feedback.

Documenting your key business processes and workflows is the other important task, Severud reported.  Wealth Enhancement Group spent a lot of time mapping internal processes, including roles and timing of steps, which helped to identify areas of inefficiency, he noted.

According to Wikipedia, “A best practice is a method or technique that has consistently shown results superior to those achieved with other means…”  Severud provided a number of the best practices derived from operating their Laserfiche ECM system. 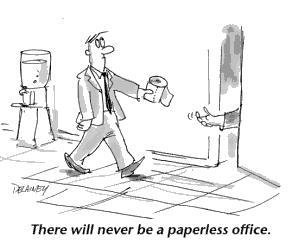 Now that they have completed the Laserfiche implementation, the future is bright for Wealth Enhancement Group, Severud proposed.  Their system is stable and operating efficiently.  They have also built an internal knowledge base that all employees can reference.  They also partnered with a great VAR, Cities Digital, which has enabled them to offload many support tasks that were previous handled by internal staff, he said.

Severud concluded by mentioning that a follow-up goal is to add eSignature support into their platform.  They decided to implement the back-end ECM system first, since document management is a more mature technology.  However, once eSignature becomes more of a common practice, they will integrate it into the front-end, he said.