“There is no Vanguard or Schwab here [in Canada]. We are the ones gobbling up the industry assets.”

In the U.S., Vanguard owns the digital advice market with their Personal Advisor Services hybrid solution. But up in the Great White North, it is a five-year-old robo-advisor called WealthSimple that is the lead dog.

At Collision 2019 in Toronto, Katchen announced a CAD $100 million (USD $75 million) investment from a combination of Montreal-based Power Financial Corporation and German insurer Allianz, which he claimed was one of the largest deals in Canadian fintech history.  I was able to grab the thirty-something-ish CEO for an interview right after he made his announcement at the conference.

Even though Vanguard and Schwab have sucked up around 90% of the total digital advice assets in the U.S., Katchen believes there is still room for his firm.  And obviously his investors do as well.  He pointed out that while most Vanguard clients are +/- 7 years from retirement, WealthSimple’s client base is mostly young professionals who don’t have the kind of assets that their parents or grandparents do today. (See Acorns: We’re Not Just Gathering Assets, We’re Building a Brand) 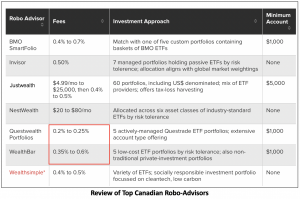 But while Katchen crows about their younger demographic, he is not neglecting more mass affluent investors. They offer a higher-end service called WealthSimple Black that offers a 20% discount on their basic advisory fee of 50 bps, but comes with a $100,000 minimum. They also throw in VIP airline lounge access, which makes it sound more like a credit card offer than an investment account.

Katchen reported that they have 72% digital advice market share in Canada, slipping slightly from the 75% they reported in 2017.  Still huge numbers, but with only 37 million Canadians, that’s like saying you have three quarters of the market of California. Not bad, but barely a fraction of the U.S. market.

The total investible assets in Canada is probably around $3.5 trillion or so while the US is expected to surpass $100 trillion by 2020.  It’s understandable why US robo-advisors would not pay much attention to the Canadian market. (See Mission: Impossible – Choosing the Right Digital Advice Vendor)

Even though the opportunity is small, Canada has attracted a number of startup robo players who think it’s a good idea to invest time and money fighting amongst each other for a few scraps of Loons.  According to a review by MoneySense, while WealthSimple has the most assets at around $4.5 billion, they aren’t the best when compared to the other robo players. There are competitors with lower fees, others with better product offerings and some with more intuitive user interfaces. But none of them are even close to WealthSimple’s AUM.

A review from Best RoboAdvisors said that WealthSimple lives up to their name by being simple to use, but lacks flexibility for investors that want more control over their portfolio.  They also impose slightly higher management fees (50 bps) than their competitors.

The firm reached $1 billion in assets in mid 2017 and launched their robo offering in the U.S. in 2018.  Katchen expressed their desire to build a global financial brand and recently launched their UK site, although they do not breakout assets by country.

Katchen mentioned that one of his company’s goal is an initial public offering (IPO), although he didn’t say whether the plan was to list on a U.S. or Canadian exchange. After doing some research, he’s has been talking about an IPO quite a lot, which makes me think he is either trying to assuage the concerns of his investors and/or his employees, both of whom are expecting a liquidity event when this happens.

While they don’t see Vanguard as a competitor to their digital customers, they did tap them as a vendor.  More than 80% of the assets in the WealthSimple recommended portfolios are Vanguard ETFs, so the Malvern, PA-based mutual fund giant is profiting from their robo competitor’s growth. 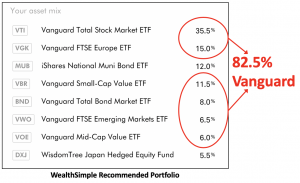 He mentioned their strong presence in two of the markets where they’re trying to grow — the U.S. and the U.K.  Did you see it as a barrier that the Canadian market sort of walled off from the U S RoboAdvisors?

We know we’re one of the few that’s done global expansion. It’s not easy on the regulatory environments or different market sizes are different. The market psyche is different for different things. And so, uh, I just find that hard to believe. (See Vestmark Adds Option Trading as Defense Against Robo-Advisors)

Insurance is on the Roadmap

During our interview, Katchen seemed to let slip that they’re looking at insurance as new product line.  When I asked him about it, he confirmed that it was on their roadmap, although he wouldn’t commit to a date.

Insurance is not an easy product to sell, especially without an agent and relying only on digital interactions.  But Katchen stated that his firm is especially good at selling products that aren’t sexy, like investing, and making people want them.  It’s similar to convincing people to eat their vitamins which he insists his firm can do because they speak to people about money in a very different way than anyone else.

I believe that insurance is a critical part of a client’s overall financial health and should be considered in combination with their investments.  More financial planning tools are including insurance planning and what if scenarios to enable advisors to demonstrate the benefits to their clients.  There are also more insurance marketplaces starting where advisors can choose among a number of different insurance carriers and more easily compare prices and benefits. (See Envestnet is Transforming into The Alibaba of Wealth Management) 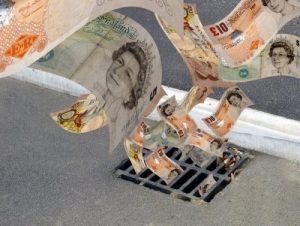 This most recent investment brings WealthSimple’s total funding to almost USD $200 million.  This doesn’t sound too high when compared with unicorn’s like SoFi or Robinhood, but WealthSimple is basically a low-cost online RIA with 120,000+ clients.  They’re going to have a tough time achieving anywhere near the same multiples as fintechs with millions of users like Acorns or MoneyLion.

You would think they would learn from the experience of US venture firms that pumped hundreds of millions into robo-advisors here. Yet, Wealthfront’s valuation was slashed by almost a third last year to just $500 million and they have over twice the AUM of Wealthsimple and probably three times the number of customers.

Katchen is stoic in the face of this adversity by stating that they have not taken any VC money. Their investors are partners that are looking to get a jump on the major secular trends that are impacting their business, he stated. (See Comparing The Best Digital Advice “Robo-Advisor” Platforms For RIAs)

Investments in Wealthsimple might take longer than the five to seven years time horizon that most venture capitalists expect to make their return, Katchen said.  They’re looking at closer to a twenty year time horizon.

That’s a heckuva long time to have your money tied up.

Part of their new partnership with Allianz will be to help them build a next generation digital service offering,  Katchen explained.  He thinks they can do this since they are able to talk to people about money in a way that is engaging and interesting.

Developing original content is a huge part of their offering and they produce a digital magazine, Katchen noted.  They hired a team of editors from GQ Magazine with no financial services experience to create compelling and interesting content that attracts a younger client demographic.

It may be working since he reported that a third of their clients log into their website on a daily basis, which is a dream-level of consumer behavior, Katchen pointed out. Although, for wealth management it may not translate the same since clients who check their portfolios too often are generally less satisfied with their advisors.

No matter how many GQ editors they hire or how many magazine pages are published, the success of their company is based on asset growth and generating revenue.  Researchers have estimated that advertising cost per account acquisition at robo-advisors is approximately $300 per gross new account and $1,000 per net new account.  Even after they become profitable, the payback period on these costs can be more than a decade.

Can Wealthsimple make it?  Some of their initial data looks promising.  50% of their accounts have an automated contribution plan in place and early clients saw their assets double within the first year.

But the central challenge for any advisory firm, traditional or hybrid digital, is how to maintain relevance in their clients lives?  Katchen believes that his firm has built enough of an entertaining experience that is easy to use, with engaging content, that their existing clients will continue to add assets and they can attract enough new clients to reach the asset levels necessary to please their investors.

“We’re in the business of selling trust,” Katchen stated at the end of our conversation.  But that’s table stakes in this business.  Wealthsimple will need to innovate to continue growing in spite of greater competitive pressures to reach their lofty global expansion goals.